The Labour party today brought it’s “new” proposals to the city cabinet for resolution of the Birmingham bin strike. The “new” report was kept secret and not even the councillors favourite journalists were allowed sight until this morning when Kathryn Stanczyszyn of the BBC began to tweet photographs of text that appeared to propose many of the basic features of the original deal conducted by Clancy and which the cabinet subsequently reneged upon.

But what they give with one hand they take with the other.

What has been released today is not the whole story. What we learn today is that the Council will change the name of the Grade 3 job. That sounds like a victory for bin men. But to make it a victory for Labour Councillors they have added in a whole new job role. It will not merely be a rebranding – it will involve a longer week for no more pay
as there are attempts to claw back the rest day (compressed working week) and put everyone into a five day week.

The BBC journalist noted the reference to the words “retain a GR3 role” and the bizarre explanations emanating from the mouth of Lisa Trickett (Labour Cabinet member for bins): 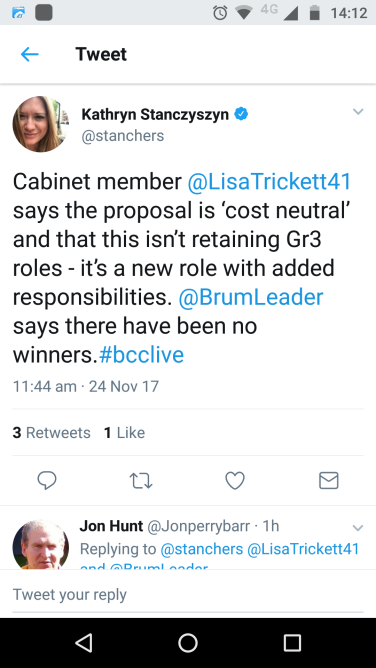 Trickett may hope the general public is as gullible as her local CLP (who just reselected her for 2018) but it was not lost on anybody that having wasted more than £6.6 million in taxpayers money the “new” proposals could hardly claim to have been “cost neutral”! The most vital thing to take from Cllr Trickett’s remarks is that this isn’t the keeping of the Grade 3 role – it is a new role. It is walking up the road with a ludicrous tablet in your hand, ticking boxes and making notes whilst trying to collect bins and not get run over.

The next step is for the bin men to discuss the proposals at tomorrow’s mass meeting. No doubt there will be questions over the following:

Brother Ricketts, trade union rep from Tyseley was suspended on spurious grounds at the start of the dispute, clearly in an attempt by bullying managers at that depot to undemrine the strike. Unite announced early on that his reinstatement was a red line. As it happened, Tyseley rose to the challenge of losing an experienced comrade and those who took over from brother Rickett’s represented the workers admirably. All bin men will want to know when he will be reinstated.

The ludicrously titled Waste Reduction and Collection Officer, i.e., a bin man, is the attempt to mask over the failure of the Council to beat the bin men into submission, whilst trying to find another way of cobbling together the savings they insist they must make. No mention was made today in public of how much more work will be put onto the job, nor how many more days they will be expected to work, for the same pay. The compressed week is a target, and bin men will have even more work heaped upon them.

It is clear that having failed to take from the bin men their grade 3 wages the Council intends to take extra labour for free. Having undertook militant strike action that proved in practice the bin men can beat these Labour wretches, why should any worker accept that to retain their current pay they must accept a increase in their working day, epecially when they already undertake an incredibly taxing job?

Victory to the Birmingham bin men.