What is a scab? 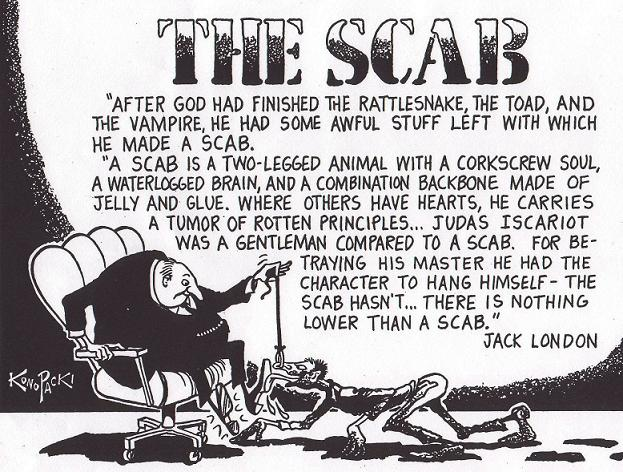 **Jack London was an American socialist. He wrote this poem giving his thoughts on scabs. The full poem is below:

“Ode To A Scab by Jack London

After God had finished the rattlesnake, the toad, and the vampire, He had some awful substance left with which He made a scab. A scab is a two-legged animal with a corkscrew soul, a waterlogged brain, and a combination backbone made of jelly and glue. Where others have hearts, he carries a tumor of rotten principles.

When a scab comes down the street, men turn their backs and angels weep in heaven, and the devil shuts the gates of hell to keep him out. No man has a right to scab as long as there is a pool of water deep enough to drown his body in, or a rope long enough to hang his carcass with. Judas Iscariot was a gentleman compared with a scab. For betraying his Master, he had character enough to hang himself. A scab hasn’t.

Esau sold his birthright for a mess of pottage. Judas Iscariot sold his savior for thirty pieces of silver. Benedict Arnold sold his country for a promise of a commission in the British Army. The modern strikebreaker sells his birthright, his country, his wife, his children, and his fellow men for an unfulfilled promise from his employer, trust, or corporation.”