Bin men in Birmingham on strike

Red Youth activists joined bin men on picket lines across Birmingham today as Unite members walked out over pay and Labour Council cuts to services. Perry Barr tip, Lifford Lane, Tyseley and Digbeth were all out on strike, with only a handful of scabs crossing pickets. We reproduce below links from local media and todays article from the Birmingham Worker. 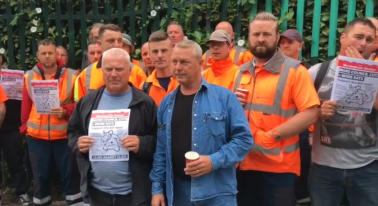